23. October 2008 – Anne Damgaard recieved The Nordic Award in Textiles 2008 followed up by a solo exhibition at Borås Textil Museum, Sweden. 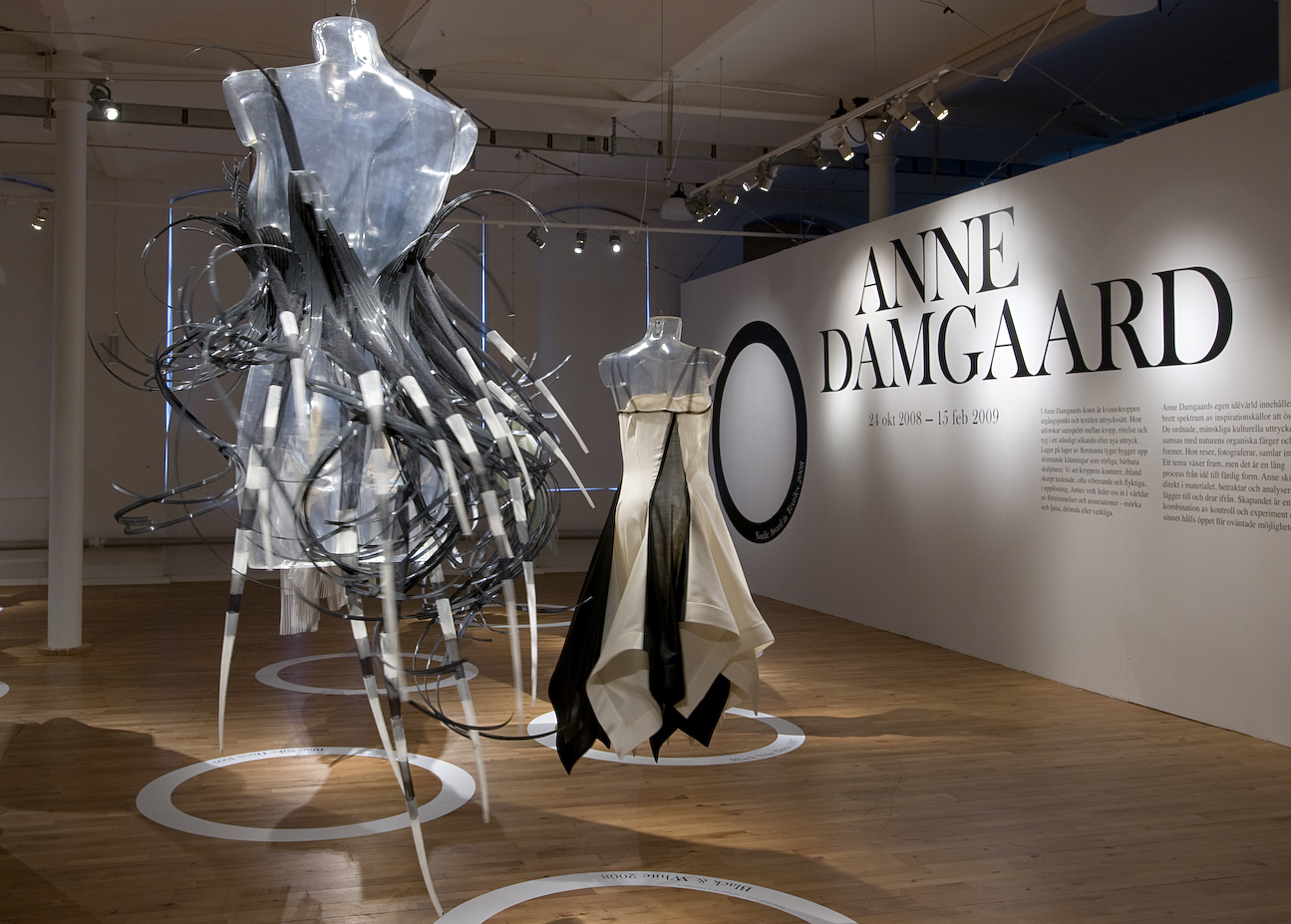 Anne Damgaard holds a small black and white object between her fingers:
“Can you see what it is?” It is quite easy to guess. It is a quill from a porcupine her family saw in the Zoo. Anne, to her family’s astonishment, crawled over the fence to where the animal was to grab this little piece of nature that had broken off and lay on the ground, no use to anyone. A moment’s impulse – like when you find a beautiful feather and pick it up – Anne holds the beautiful little pointed organic object in her hand.
We are in the workshop where her fantastic dresses take shape. Day after day, week after week, dresses emerge, the likes of which have never been seen before, although those of us with some knowledge of talent and fashion can recognise them as an Anne Damgaard.

The latest dresses in the tightly-packed little workshop are incredibly beautiful, light, organic, transparent and seemingly alive. On the dummy hangs a model with tubes of tulle stitched on. The tubes are black and white, like the porcupine’s quills, and you can hardly imagine Anne asking her guest:

Because the answer is clearly a dress. Although it is only suggested by its shape, it is already finished, after a fashion. We only need a hint of the truth to imagine the rest. But the trick is not to imagine anything at all, but just to enjoy what there is. The artist Paul Cézanne’s suggestions of Mount St. Victoire. Light strokes with watercolour or oil paint on a piece of white paper or canvas are not unfinished pictures. Perhaps they bring us closer to a sense of what we see when we see. We see neither a mountain, nor a painting. We see something in between. We sense with much more than just our eyes. We feel the substance. We feel that we are contributing to the same creative process as the artists who pass their work on to us. There is a richness in Anne Damgaard’s dresses not found elsewhere. They are something special. Like the porcupine’s quills and Cézanne’s painted mountains.

Is the porcupine aware that it is a porcupine? Was Cézanne aware that he was his mountain, as Anne Damgaard is her dresses? Anne was not inspired by the quill she found from the porcupine, the name of which comes from the French porcupine – pig with quills. Anne simply recognised something in her own process or development. For months she has been folding tubes of tulle and stitching them onto dresses of all colours of the rainbow and suddenly an archetype emerged. The porcupine is also a kind of createur in our incredible world. It has its reasons for growing quills, whether it lives in Africa, Asia, Italy or North or South America. It may also have its reasons for losing these quills now and again. And others have their reasons for collecting them. Native Americans decorated their clothing with them, just as Anne has found her abstract entry point with her version of The Porcupine Dress. When a woman wears this dress, she will be attractive like few others. When the dress is on a dummy, it is first and foremost the dress we will admire. The dress remains the same in use or at rest – whether it is on a hanger under the ceiling in the workshop, in the museum exhibition or placed on a department store shelf. It is the same with porcupines – just because they are in the Zoo or stuffed in museums, they do not cease being porcupines. Each individual is unique – a richness of species and detail that we need to protect and look after. But it is nature that develops the richness of species and detail. Without sounding pantheistic, we need to confirm that nature is also culture and vice versa if aesthetics and people are to lead a happy life together.

The world is a beautiful machine. It can produce a Cézanne painting, and who would not want to own such a thing? Apart from the costs of insurance, anxiety and associated problems, it requires the strength to disregard values. You can even act as if your own Cézanne is worth nothing. There is no real difference between a genuine Cézanne, a Damgaard and a quill from a porcupine in this respect. We ourselves ascribe value to things, but they are part of a cycle that we are not alone in controlling. The joy that has lovingly produced such excellent works of art as Anne’s dresses – because art is what they are – that is what we should value. We can do that through honours, medals or purchases. We can also do it through a gesture, as when we offer someone a helping hand or recognise that we live in the same world and are dependent on each other. Handicrafts and design have had a tendency to be viewed as either arts and crafts and less fine than Fine Arts, or commercial and without artistic value. Anne Damgaard’s works are located outside these categories because she prefers to place herself in her workshop rather than anywhere else. As such, she is at the centre. And as such, she is part of the world’s infinitely large machinery. She is part of it, but has chosen to focus on something she can do something about: she creates dresses of extraordinary beauty and she does it unceasingly, following her own rhythm.

These dresses mean something. They have meaning for the surrounding world. Anne Damgaard shows us the results of her many years of work with materials. Wool and tulle, colours and shapes, art and non-art. Unrest and energy may have transformed themselves into dresses that on the surface radiate great peace, harmony and balance. But everything is still there. The energy is not lost. It reproduces. There is a depth and inner beauty in Anne Damgaard’s works. Not only can you see it – but sense it, feel it, observe it. A dress is not just a dress. Anne’s dresses are both physical and mental constructions. They are openings to larger spaces – internal and external. Perhaps these beauties are a kind of revelation? They expand the world in any case, if details count at all. 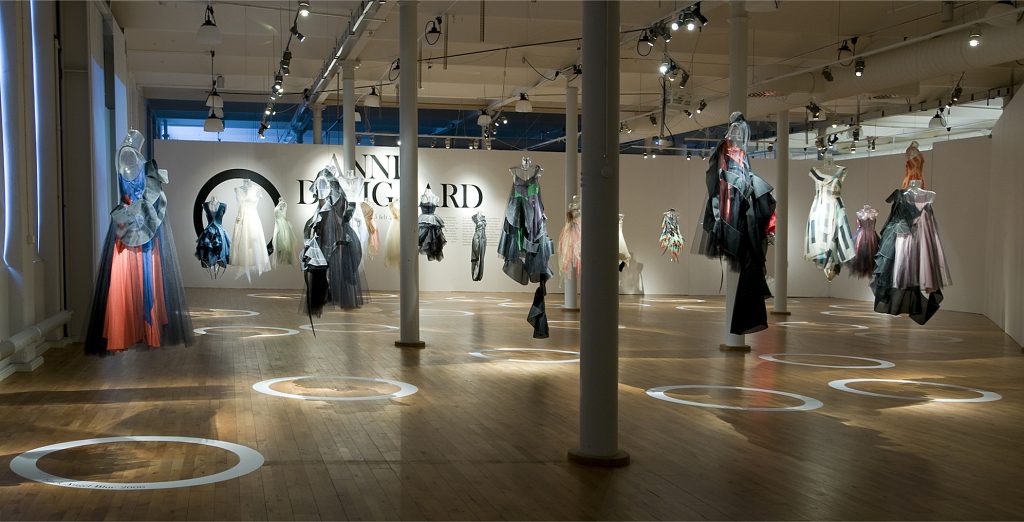 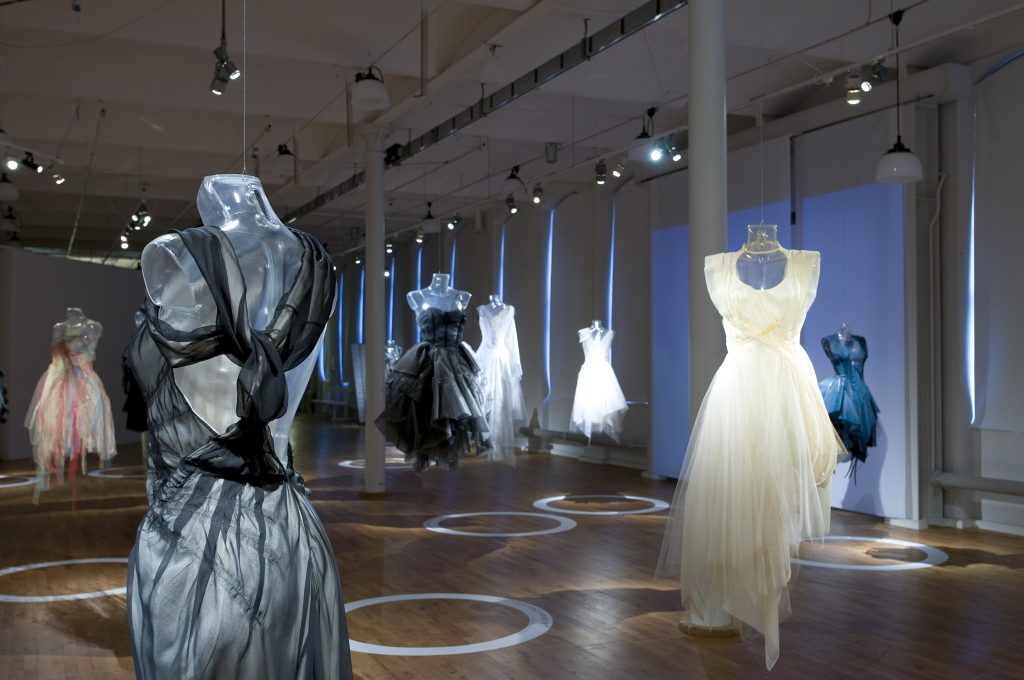 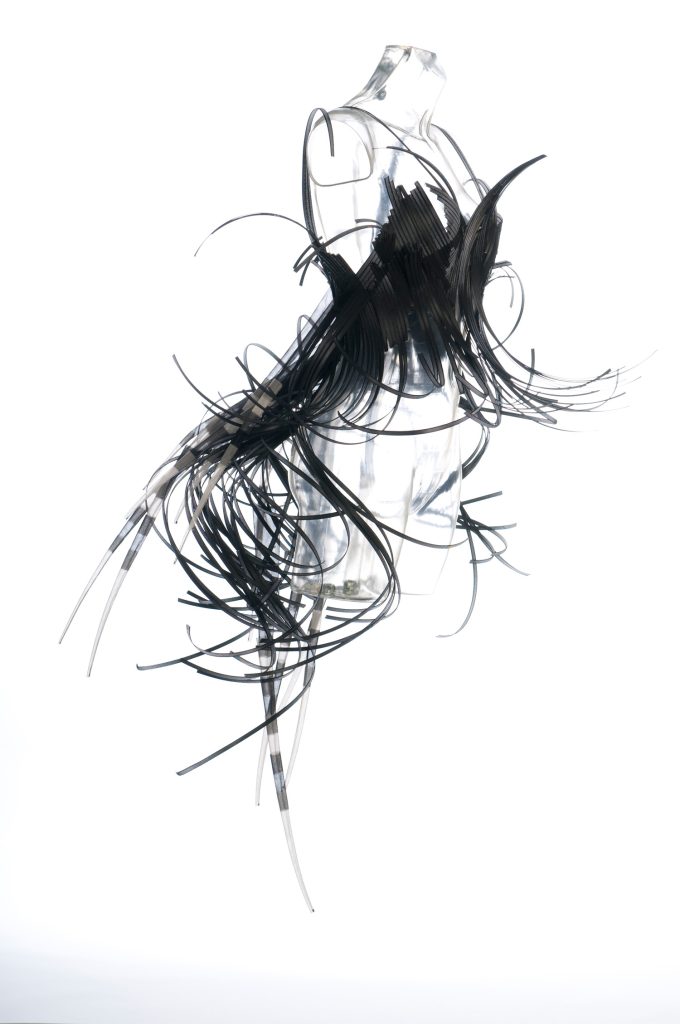 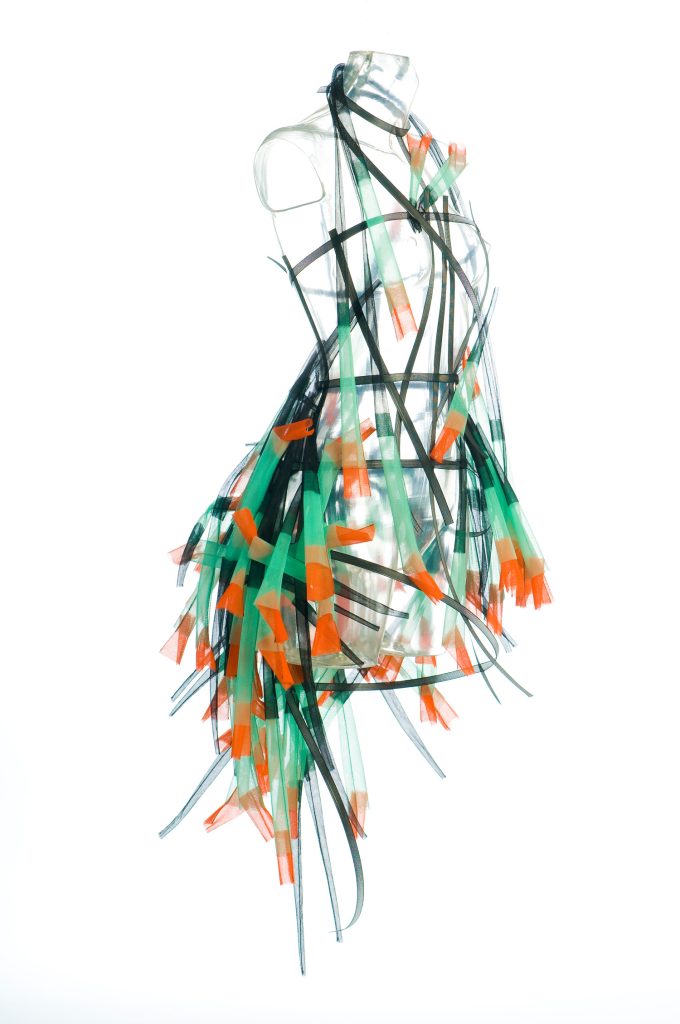 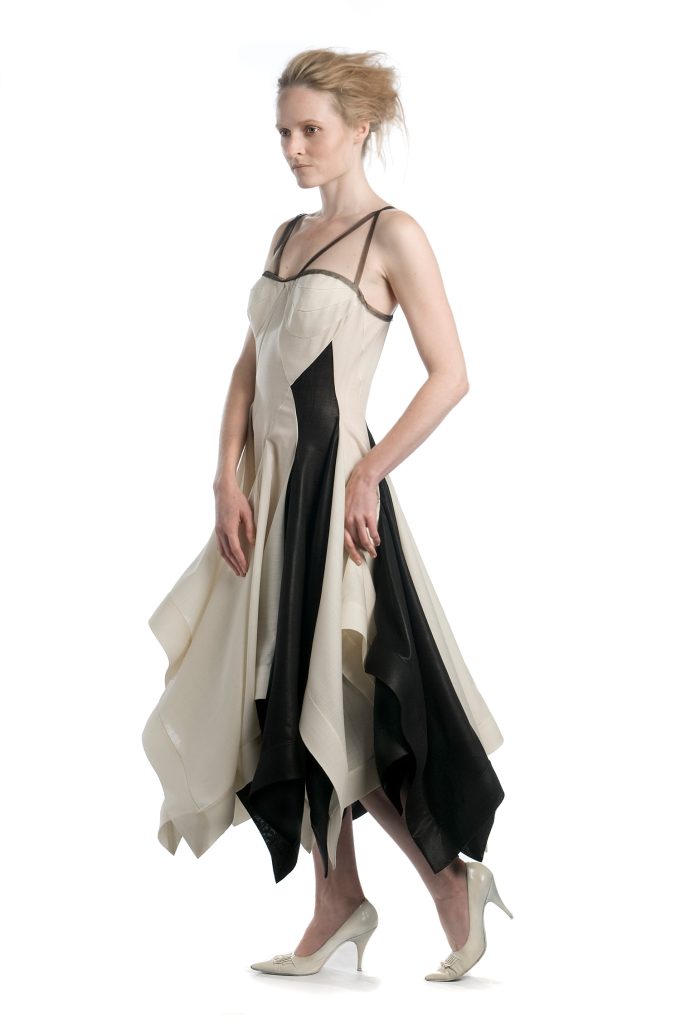 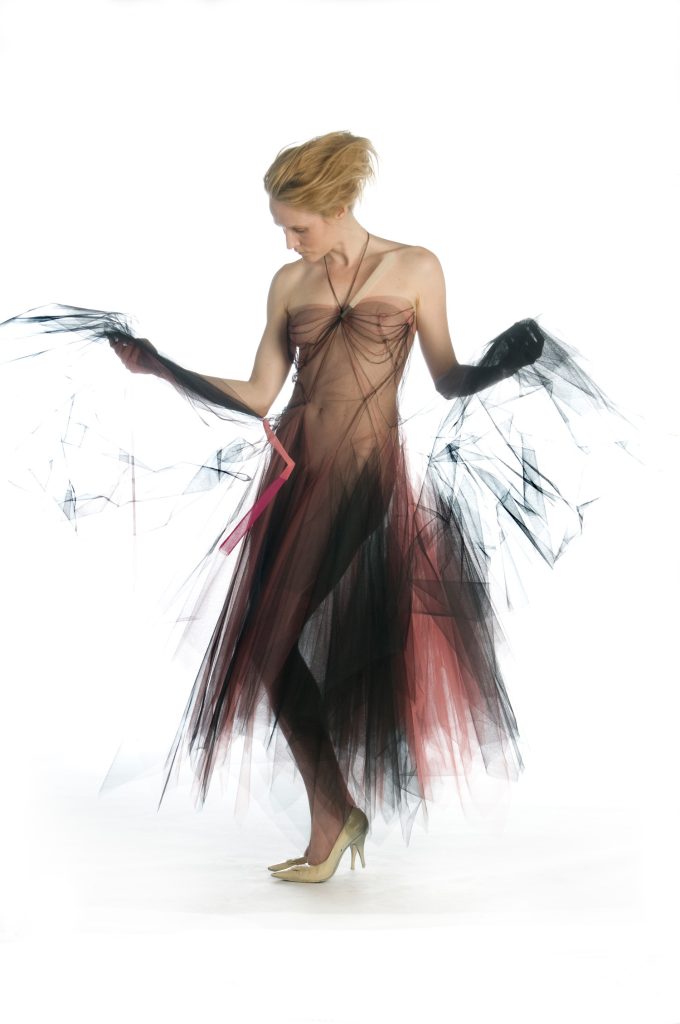 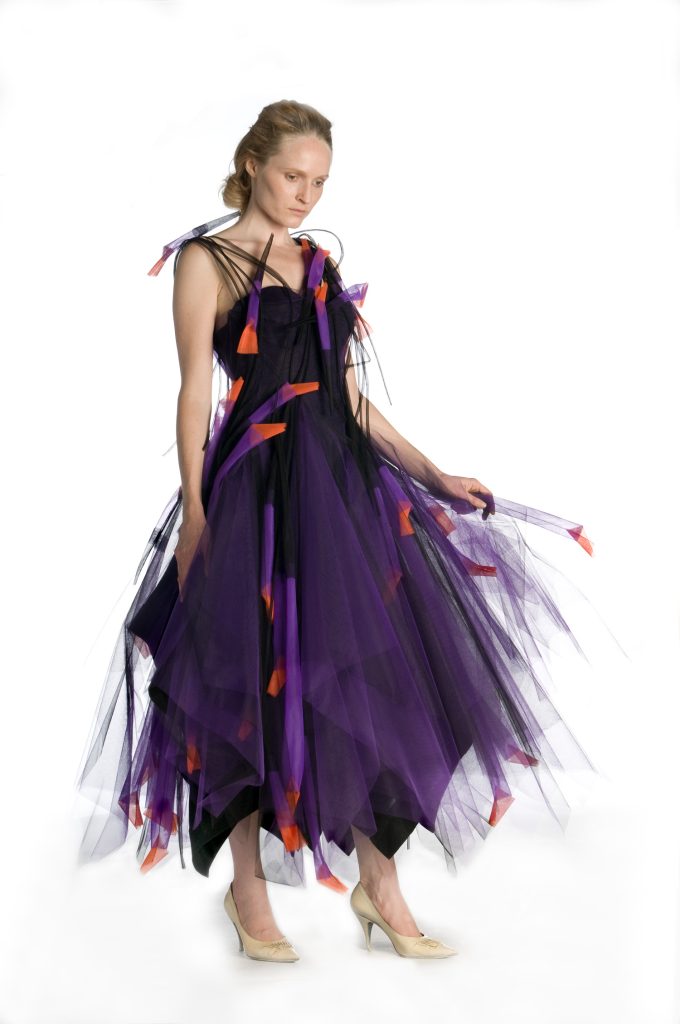